The red kite nesting season is now in full swing and for the next two or three weeks it is possible to get really good views of the incubating females and their young before the leaves screen them from sight . . .

The red kite also represents the ultimate in wildlife success stories. Reduced to barely a dozen individuals a century ago, it now numbers over 2,000 pairs and now regularly soars over London Sunny weather is always welcome, but for bird lovers it holds an extra appeal. Most raptors are relatively shy and elusive, but clear blue skies mean thermals and this triggers an almost Pavlovian reaction among hawks and falcons. The slightest hint of lift sends them into a reverie, splaying out their wings and tails to their fullest extent to rise on the invisible elevator of warm air. This display is always impressive, but none more so than that of the red kite.

With their five-foot wingspan, rusty plumage striking blue-white head, kites are both beautiful and easily spotted, but they can be confused with the similarly-sized buzzard. As a result, most books suggest the former’s forked tail is the simplest way to differentiate the two. This is true – but it only works when the birds are soaring overhead with their tails fully unfurled. Viewed from the side or in flight, the telltale fork is not always apparent. The general flight pattern is a better guide. Kites have longer, slightly tapered, wings which are beaten with an exaggerated slowness in an almost elastic fashion. They are refuse collectors which hunt by quartering hillsides twenty or thirty feet from the ground to snatch carrion, invertebrates and small mammals – usually without landing and as often as not eating the morsel on the wing.

In contrast buzzards have shorter, broader, wings and heavier bodies. This means they have to work harder, typically flying with three wing beats followed by a glide and often hunting from a perch such as a telephone pole.

As one watches these magnificent birds, it is worth pondering on the past and noting them as probably the greatest conservation triumph of the last century. One hundred years ago they were fewer than a dozen left, confined to a remote valley near Llandovery in Mid-Wales. Worse, we now know – thanks to DNA mapping – at this point there was only one fertile female. The birds looked set to follow the goshawk, osprey and white tailed eagle into extinction – particularly in the absence of any legal protection.

Fortunately a handful of dedicated conservationists launched a concerted local PR exercise to encourage landowners and farmers to look after their birds. The protectionists explained that despite the hooked bill and talons, these are specialist scavengers that present no threat to game or livestock.

The campaign worked and the birds recovered slowly from their low point to reach around 80 pairs in 1990, but the geographic expansion was very limited, mainly because they almost always breed within five miles of their natal nest. 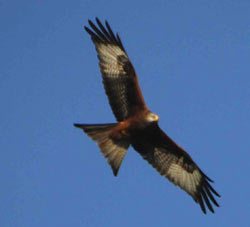 In the early 1990s the RSPB began a release programme in the Chilterns which proved such a resounding success that it was repeated across the country. In all there are now well over 2000 pairs, half in Wales, with around 800 in the Chilterns and smaller populations in Northamptonshire, Yorkshire, Dumfries and the Highlands. The future looks rosier still: in the absence of persecution there is every reason to expect to see kites soaring over every British county within the next couple of decades.