Although wild boar are common across the Continent, they rarely feature on British menus and despite being farmed here (and a growing feral population thanks to accidental escapes), it is difficult and expensive to get hold of. This recipe transforms cheap cuts of farmed pork into something closely resembling its gamey ancestor . . . 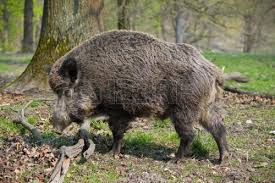 Whizz up all the marinade ingredients up in a food processor for a minute to chop roughly. Add the wine. Put the pork joint in a lidded dish or Tupperware just large enough to take it. Pour in the marinade, cover and leave for at least 24 hours in the fridge, turning occasionally. Cook in any way you like – but roasted slowly works well, particularly if at the end you remove it, rub sale into the skin and then finish under the grill or barbeque to make crackling.